A view from the Diocese of St Albans 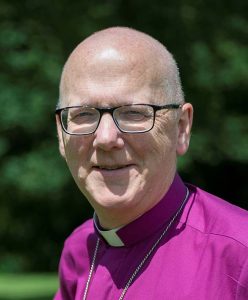 In these strange times it’s been hugely encouraging to see the response of people from every part of Hertfordshire to the Coronavirus pandemic and in particular, the way that new partnerships have been forged. In the lead up to the lockdown, the Diocese of St Albans (which covers Hertfordshire, Bedfordshire, Luton and parts of Barnet) had already put a number of initiatives in place, reviewing our work with food banks, debt advice centres, lunch clubs for the elderly, children’s and youth work, and toddlers’ groups. However, once physical distancing was put in place much of this had to be rethought rapidly. Within a few days, my colleagues and I had had individual phone conversations with over 250 clergy discussing what we could contribute. We were glad to join with others in many local communities in setting up phone networks to support those who were forced into self- isolation and offered help with shopping and other essential services.

In response to a request from the Hertfordshire NHS Community Trust, we also set up a 24/7 phone line so that relatives of those who are dying or who have died can be given rapid support over the phone and then be referred onto others who can give longer-term support. The Church of England responded to the request from the Government to stay at home by locking our buildings and ceasing public worship in them. This decision, which is still causing us problems, was difficult as we have to care for the buildings and, as with many charitable organisations, much of our voluntary income has dried up. The decision, which was applauded by politicians and health leaders as ‘leading by example’, prompted a lot of negative comments from local people, many of which ended up on my desk! However, most of the criticism has died down as people began to hear of neighbours and relatives who had caught the virus and as realisation of the seriousness of the situation grew. Fortunately, it’s only the church buildings which are temporarily closed. The Church, as the living body of worshipping people, was and is still open for business. It was humbling to watch as congregations threw themselves with gusto into finding new ways of working and worshipping. Although a few of our churches had already been live-streaming worship, by the first Sunday of the lockdown the vast majority of them offered online worship. Numbers participating were much higher than usual and since then we’ve been surprised and encouraged at the response.

As with every crisis, there will be suffering and grief. However, as has been shown by Captain Tom Moore and the groundswell of support for medical and care workers, it also brings opportunities. We must not waste these opportunities to build stronger and better communities across Hertfordshire for the coming years – and we in the Church of England want to play our part in building that future.