The Lieutenancy of Hertfordshire

Welcome to the Hertfordshire Lieutenancy. This website seeks to inform and update you on the role of our Lord-Lieutenant, Mr Robert Voss CBE CStJ, and the ways in which the Lieutenancy supports and impacts on the life of this county. Hertfordshire is a vibrant, dynamic yet diverse county whose motto is: “Trust and Fear Not”.

Lord-Lieutenants were first appointed by King Henry VIII in the 1500s to assume the military duties of the Sheriff. Today, the Queen appoints Lord Lieutenants, on the advice of the Prime Minister, to be her representative in their counties. Her Majesty The Queen appointed Mr Robert Voss CBE CStJ as her Majesty’s Lord-Lieutenant of the County of Hertfordshire to succeed The Countess of Verulam who stepped down on 31 July 2017.

The Lord-Lieutenant upholds the dignity of the Crown and serves the community. Supported by the Vice Lord-Lieutenant and by other Deputy Lieutenants, Robert Voss is the main link between the Monarch and her people in the county.

The Queen in her capacity as ‘Head of the Nation’, in which she acts as a focus for national identity, unity and pride; gives a sense of stability and continuity; officially recognises success and excellence, and supports the ideal of voluntary service and community integration. Robert Voss gives his time voluntarily to the role and helps promote and encourage voluntary and charitable organisations, local businesses, arrange visits from the Royal Family, attend civic and social activities, support the work with the Armed Forces, take part in the honours’ system and appoint appropriate Vice and Deputy Lieutenants.

While the Lieutenancy’s role has evolved over time, much like that of the Monarchy’s, its purpose in supporting the Crown remains. The Queen and her Government expect certain duties of the Lord-Lieutenant. These duties may broadly be classified as being: (i) to assist with visits by Members of the Royal Family; (ii) to promote, encourage and validate nominations for national honours and awards, and to present certain honours, medals and awards on behalf of The Queen, notably, these include British Empire Medals, the Queen’s Award for Voluntary Service (QAVS) and the Queen’s Awards for Enterprise (QAE); (iii) to liaise with and support local units of the Armed Forces and associated Cadet Forces; and (iv) to lead the local magistracy as Co-chair of the Bedfordshire and Hertfordshire Advisory Committee for Magistrates, with the Lord-Lieutenant of Bedfordshire.

In addition to these duties, the Lord-Lieutenant will follow the example of The Queen and other members of the Royal Family in seeking generally to promote a spirit of co-operation through the encouragement he gives to voluntary service, and to benevolent organisations, and by the interest he takes in the business, industrial, community and social life of the County, and of its affairs generally.

You are invited to use this website to familiarise yourself with the workings of the Hertfordshire Lieutenancy and the way in which it can act as a conduit for you to the Royal Family, the Honours System, Queen’s Awards and congratulatory messages.

For a full description of the Lieutenancy click here.

The Lord-Lieutenant’s mission statement is: To take the Lieutenancy to the people of Hertfordshire. 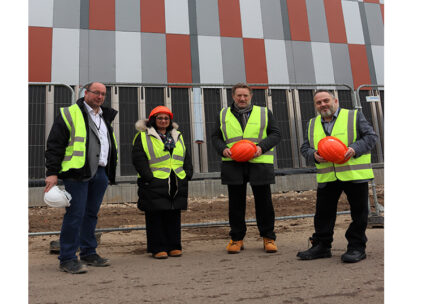 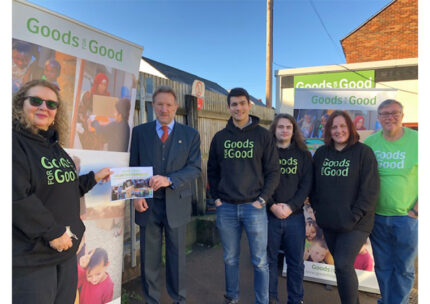 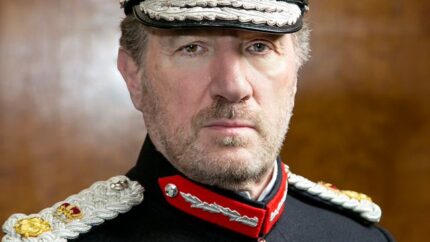 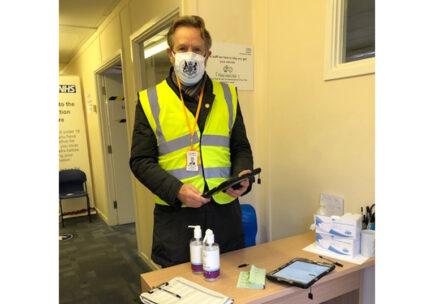 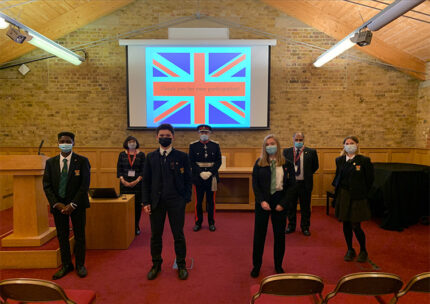 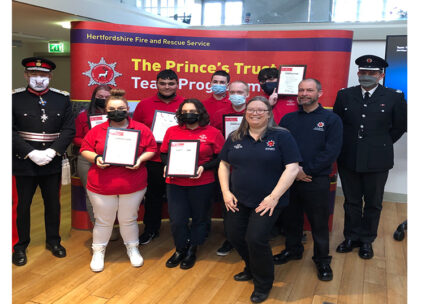 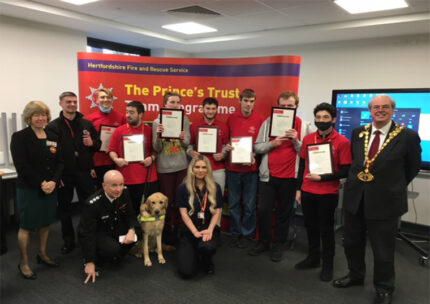 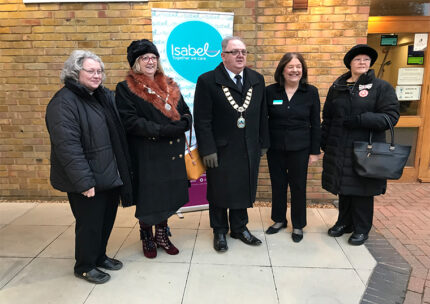 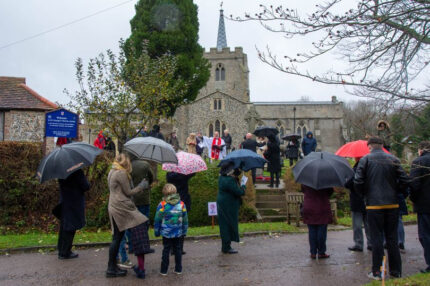 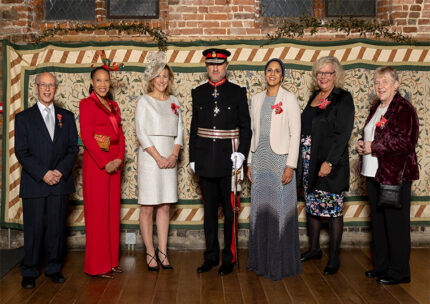 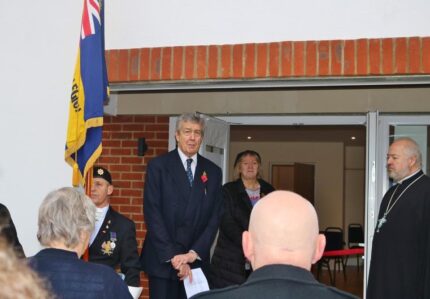 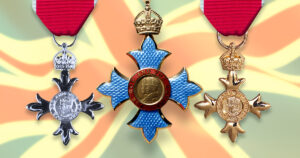 Congratulations to all of Hertfordshire honours recipients in the New Year’s Honours List 2022.

The support shown by the people of Hertfordshire for the refugees arriving in the county from Afghanistan has been overwhelming and as Lord-Lieutenant of Hertfordshire as well as Patron of Herts Welcomes Refugees, I want to express my thanks and also pride at the manner in which the many communities around the county have reacted. I also express my appreciation of the councils around the county who have committed to resettling refugees as well as those organisations arranging temporary accommodation.

At the present time no further donations of clothes and other items are required but donations to HCF’s appeal would be welcomed.

Once again the people and organisations of Hertfordshire have shown their community spirit and heart by the support shown at this time.

THE IMPACT OF COVID-19 ON YOUNG PEOPLE IN HERTFORDSHIRE 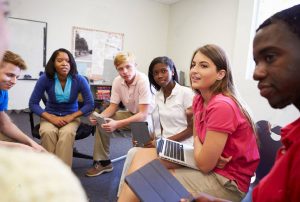 Following a meeting called by the Lord-Lieutenant involving leaders from the community and within Hertfordshire on 15th December 2020 to discuss the post-pandemic prospects of young people in Hertfordshire, a series of focus groups were set up by the Lieutenancy. The purpose was to hear directly from young people about the impact of COVID-19 on their lives over the past year and their future aspirations.

Nineteen groups from 11 different organisations participated in virtual sessions between 3 February to 19 March 2021. Sixth formers from state secondary schools and colleges, cadets and one group from The Prince’s Trust Hertfordshire Team Programme took part in small group sessions of five to seven students of mixed gender and ability.

Each group was asked six questions relating to how their studies, mental health and aspirations for the future had been affected by the pandemic. Young people were encouraged to speak openly about their feelings, hopes and fears. Their responses, captured in the report by Deputy Lieutenants Jo Connell and Marion Brown, demonstrate the impact the pandemic has had on all aspects of their lives.

The Queen's Award for Voluntary Services

Do you know a local volunteer group worthy of recognition for the Queen’s Award?

We Want to Celebrate:

The Lord-Lieutenant of Hertfordshire@hertslieutenant·
20h

Planting 2 more trees for both ⁦@QGCanopy⁩ and ⁦@TheAJR_ at Radlett and Bushey. Adding to the growing legacy in #Hertfordshire whilst hearing dramatic stories from refugees.

The Lord-Lieutenant of Hertfordshire@hertslieutenant·
20 Jan

Many happy returns to HRH The Countess of Wessex from the people of #Hertfordshire. We look forward to welcoming you back to the county. ⁦@RoyalFamily⁩

The Lord-Lieutenant of Hertfordshire@hertslieutenant·
20 Jan

Planting more trees in #Hertfordshire for ⁦@QGCanopy⁩. Today in ⁦@Croxley_Green⁩ in beautiful winter sunshine. Wonderful to see the canopy beginning to grow.

The Lord-Lieutenant of Hertfordshire@hertslieutenant·
17 Jan

A pleasure to visit Goods for Good charity in #Watford and to meet some of the team. Amazing that they have delivered over £33million worth of humanitarian aid locally and around the world supporting 3.2 million vulnerable people. Another great #Hertfordshire charity.