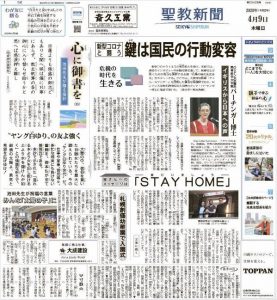 Stay home and save lives

Hideki Hagimoto: The COVID19 is rapidly spreading worldwide. Please tell me about the situation in Britain.

Claire Bertschinger: On March 23 it was announced that we must refrain from going outside except for limited purposes such as shopping for basic necessities and getting medications. When going outside people are told to be at least 2 meters apart. Except for a case where your work cannot absolutely be done from work, you have to work at home. In London which is put into Lockdown, even during the daytime, we see a few cars and people.

​I live in the county of Essex and haven’t been outside for three weeks. As a nurse, I am a stand-by and I have to be extra careful not to be infected. I have friends who buy food and kindly deliver them to me. And I work at home teaching online. This is the first time I work from home so I have to get used to doing things online.

HH: Your students are on the frontline of looking after COVID patients.

CB: As the director for the Diploma in Tropical Nursing course I am training 50 students, all of whom are nurses or specialists in infectious disease or tropical disease. Many of them are now looking after COVID patients. I keep in touch with them every day, and I believe that only teaching but giving them moral support and compassion is part of my role.

​One student who is currently working in ICU in a hospital in London shared with me that, as they had to rush to reorganize wards inside her hospital, they didn’t even have a sink with soap and water in the area selected for donning and doffing PPE. This is how chaotic the situation is, but it nevertheless changes one day after another.

HH: What is the biggest challenge now?

CB: In Britain the peak of the outbreak is expected to be in the middle of April. Our challenge now is to flatten the curve—that is, to keep the peak as low as possible. This might make the virus live longer but would enable us to save more lives of people including elderly people and those who are ill.

​The key to this challenge is of course people’s understanding and behavior. What is more important now is to isolate yourself from friends and even from families. My advice to Japan, which will hit the peak later than Britain, is also “Stay Home.”

​On the frontline of the fight against COVID 19 are staffs of NHS. We are facing shortages in nurses and doctors and medical supplies, and that is being a serious issue. Given the dramatic rise of the virus “NHS Nightingale hospital” was built in the exhibition centre which was used for the 2012 Olympic game, and the construction was done only within 9 days. The hospital started accepting patients this week. And similar tentative hospitals are going to be built in other places including Harrogate and Glasgow.

HH: The battle against this virus has been prolonged and that makes many people tired both physically and mentally.

CB: It makes you nervous and frightened to fight against something you cannot see. In addition, nurses and doctors are confronting the virus which cannot be cured that we know so little about. I cannot stress enough how stressful that is. My students were telling me how they go home and cry. What worries me now is PTSD.

​I myself suffered from PTSD after working in war zones. When you are on the frontline you have lots to do and you don’t even think about anything. But later, to my case years later, something happens and all in a sudden your experience in the past starts affecting you emotionally. Now nurses and doctors need care. It’s crucial that we listen to them and talk about normal life.

HH: You have met so many people who would not surrender severe circumstances such as war, poverty, or sickness.

CB: I think one thing that was common among such people is “smile.” Those who could smile regardless of their situation had the will that they would not be defeated by hardships. And I also think that smile sometimes opens up people’s hearts more than words do.

HH: Many people talk about how the voluntary work at the NHS Nightingale Hospital was signed up by a lot more citizens than expected. In the midst of “the biggest challenge for the world since WW II” (UN Secretary-General Antonio Guterres), human’s innate virtues such as solidarity and care are being re-acknowledged.

CB: There is a time in a week when, despite news and updates on the coronavirus that occupy our everyday life, the entire nation is filled with brightness. It is every Thursday at 8:00 pm, when all the people express their appreciations for NHS staffs. We open our windows and get out to balconies or driveways, illuminating the night with blue light which is NHS colour and clapping and cheering. I ring a bell as loudly as I can. Though the situation continues to be tough, this makes us remember the British Spirit and unite us as one.

​The crisis we are facing now is like a war. But this is a war where people are not divided but united and fight against the same cause. In that sense international cooperation where countries share useful information is also important.

​Thanks to technology, today we can be connected with everyone on the earth in a quick moment. Though the world has become smaller, it is also true that our ties in our neighbourhood and communities have become weaker and thus we are more apart than ever. The coronavirus puts us in a situation where we all have to stay home, but this allows us to remember something I call “village mentality”—where you care about and look after people who are closest to you. I can feel it and that is amazing.

​“Being isolated” is important, but we must also keep in mind that we leave no one left behind, lonely. What is necessary now is to create value: because we are apart, we can be together. SGI, with its fundamental philosophy to create value, is where members chant to act for happiness of oneself and others. That way, I firmly believe that SGI is on the frontline of opening a new era of solidarity.

Prime minister Boris Johnson, though previously isolated at home with Covid 19 symptoms was moved to hospital and then ICU on the 6th. This sudden change has really shown the UK that this virus doesn’t discriminate.”